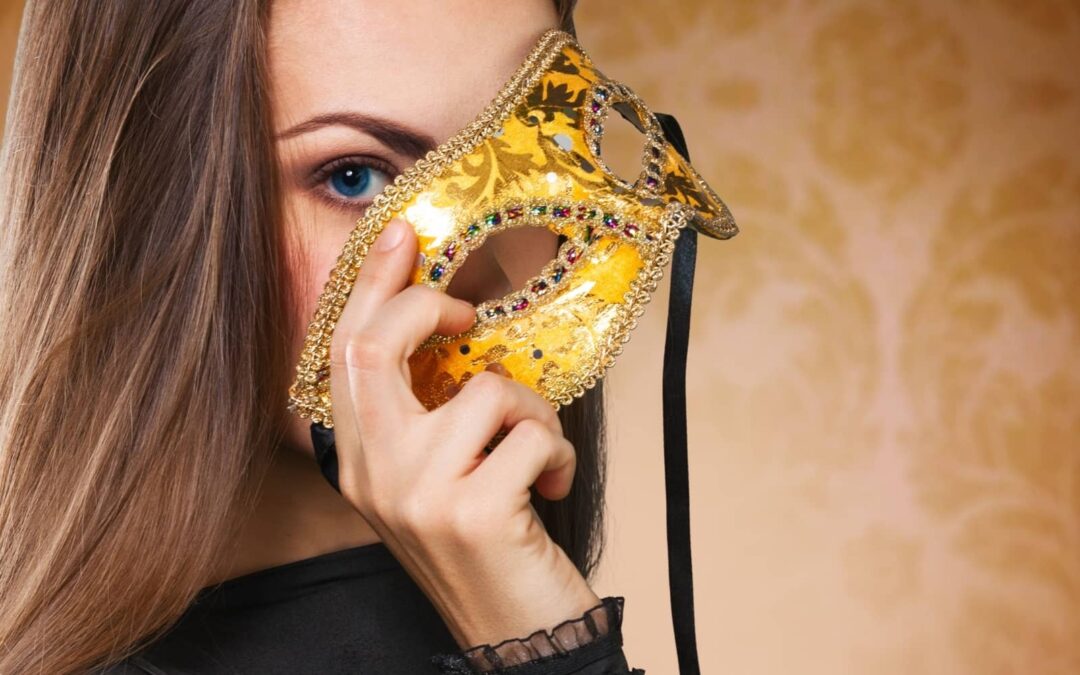 There were these three Hebrew boys – young men.

They saw what was happening when no one else did.

They warned their people of impending tyranny. Even among those who might have seen the signs, nobody dared to speak up.

The king would go around having these grand ceremonies, where in every precinct, every citizen would have to bow down to a statue of His Highness.

“It’s just bending the knee, you fools. It doesn’t mean anything. Just stop causing trouble, or you’re just going to make life miserable for all of us!”, they were told by their friends, family, religious leaders.

That would’ve been easy. They would fit right into the rest of the crowd. Obey the law. Follow the orders. They’re for your safety and security.

So, when the trumpets sounded, and upon the king’s orders that every knee should bow, they broke with the ranks, broke the law, stood their ground, and said “Not us!”

A young German woman. She had a good life; after all, times were good. The great war was beginning to fade from memory.

Behind the façade of relative peace, there were troubling signs on the horizon. Few saw it, few talked about it. Everybody loved the new leader. He was uniting the nation, had a commanding presence, strong leadership, promised a great future, all accompanied by media images of a cultured gentleman beloved by children and animals.

It happens slowly at first. A new law here, a new restriction there. The change of name from the German Workers’ Party to the National Socialist German Workers’ Party, or Nazi Party for short. The attempted overthrow the government of Bavaria should have been a red flag, but instead, buoyed by a compliant media, there was widespread sympathy for Hitler’s aims.

While the attempt failed, it became the impetus for a pretty popular biography at the time. Politicians love writing a good biography. The young woman saw right through it, and began warning her contemporaries. “Nah,” they said. “Look at how free Germany is!”

Things weren’t happening fast enough for the Hitler. What could he do? Ah – an emergency. Well, what a timely coincidence. The Reichstag Fire, and in its aftermath, new emergency legislation, decreed without parliamentary consent. It abolished freedom of speech, freedom of assembly and association, freedom of the press, suspended the autonomy of federated states, legalized phone-tapping, the interception of correspondence and other intrusions. Travel restrictions. “Your papers, please.”

She figured that by this time, everyone could see what was glaringly obvious. “Conspiracy theorist!”, they shouted. By the time the order was given for the Nazi salute to be used in all greetings in Germany, everyone was happy to “Heil Hitler”.

It was an easy thing to learn to live with. “Just raise your damned arm,” they told her. “It doesn’t mean anything. It’s just some stupid symbol.” She resisted, even pleaded. “It’s not just a symbol”, she said. “It gives credence and power to the absurd notion that everything is fine.” The salute was a galvanizing social element. She became more vocal, and organized a resistance.

“You’re just causing trouble for the rest of us”, they accused. “It’s hard enough making a living in this town.” Even her pastor pleaded with her to stop causing dissension among the congregation and community.

“We have to obey the authorities”, he told her. “It’s Biblical. Some even think you’re just trying to make a name for yourself, like some grandstanding fool.” And they continued to raise their arms in salute. But not she. All but a few close friends abandoned her. She stood her ground.

He was only a few months into his new job. Great pay, great people, prestige, beautiful girlfriend, wonderful family. Life was good. His exemplary work ethic and obvious intelligence earned him quick advancement at work.

It started with a few troubling memos. When he raised questions, he was told to forget about it. It was nothing. Necessary for safety and security of the nation.

You can only ignore things for so long, and by the time he was given high-level intelligence clearance, it was pretty obvious that things were horribly wrong, and that the nation’s citizens were being surveilled upon in a fashion that they couldn’t even imagine.

Surely his friends would agree.

“We live in the freest country in the world, loser”, they told him. “What do you think this is, East Germany? Get a life, dude. Don’t you care about American security?”

Most of us would’ve said “Meh, somebody else’s battle. I just work here. It’s not my job to fix this mess.” In speaking with his supervisors, the young Snowden was quickly reminded that it wasn’t his place to speak out, but simply to follow orders.

That, he could not do.

For the next few months he didn’t dare tell a soul about his plan. Not his girlfriend, not his family, not his closest friends. He was keenly aware that this was going to cost him everything. When he finally carried out his plan, he was universally scorned and painted by the government and their obedient media as seditious, treasonous, and traitorous.

His family wondered how he could have betrayed them.

The scorn of an entire nation was on him, and he found himself in exile, certain of imminent capture, imprisonment, and likely death. But he had calculated that into his equation when he made his choice.

That was only eight years ago. Over those years, the tide of sentiment has begun to turn. Many now view him as a hero, though if he stepped foot on US soil, the wrath of the tyrants in power, and those he fought to expose, would surely fall upon him with a vengeance.

What price are you willing to pay, when you see impending disaster, to alert those around you in the face of their scorn and derision? What are you willing to do, however small a part, to take a principled stand against tyranny, especially in the early-to-mid stages, when it might still be stopped?

How willing are you to give up the comfort of conformity when everyone thinks you’re just a nutty conspiracy theorist, and calls for you to raise the arm, or bend the knee, or shut your mouth and go-along-to-get-along?

I can think of few orthodox notions that are more pervasive and foolish than the one that says, “take your fight to somebody else’s battleground – we want to live in peace. This is a small town. Go to Ottawa, troublemaker”.

Our freedoms are lost a little chunk at a time. They are lost when nobody else is watching, nobody else is noticing, but the few who are vigilant. Those, who, with the aid of history that has repeated itself over and over again, see the writing on the wall and sound the alarm bells.

I’ve spoken in other places about the loss of freedoms that so few seem to recognize all around us today.

The theatre of the absurd just to get on an airplane.

A surveillance state that oppressive governments in the past could only have dreamed of, aided by new technologies and a populace that just voluntarily hands over every private detail.

Snitch lines to report your neighbours who aren’t following the diktats.

ONE HOUR OF OUTDOOR EXERCISE, CITIZEN, AND BACK IN YOU GO!

We have been “state-of-emergency’d” into giving up our liberties at breakneck speed, because we’re fed a continuous news cycle of fear by governments and a media empire whose profits are directly proportionate to the level of angst in a population.

We’ve given up on allowing history to be our teacher. We’ve given up on deep thinking entirely, and resorted to pithy soundbites and media clips to give us the answers to the most complex and troubling questions of our time. We’ve abandoned open dialogue, free-speech, vigorous debate, and allowing a platform to those who disagree with us. We’ve allowed the silencing of dissent and any thought outside of allowable orthodoxy. We’ve hidden behind keyboards lobbing snide and repulsive on-liners at anyone we don’t agree with.

Why read a book when you can just retweet a headline?

Why read a medical journal when you can just parrot a trite, catchy slogan repeated to you by health authorities ad nauseam?

Why do the hard and uncomfortable work of talking things through with neighbours and friends and family with regard to individual freedom, family health choices, family values, and, and …

“Good Lord, could we just keep conversation to the weather, PLEASE?!”

We’ve watched for eight months now, this unprecedented assault on our liberties, and the run-up of billions upon billions of dollars in debt.

We’re witnessing the greatest collective fear that the world has experienced in my lifetime.

Emergency order after emergency order have been decreed, mostly without vote, and without any resemblance to good and honest governance.

To anyone who brings up history as a warning to his fellow man, one needs only to shout “So you’re calling me a Nazi?! You’re comparing this to the holocaust?!” and that ends the matter, and excuses the cowardly shouter from any responsibility for deeper thinking, or heaven forbid, debate and rigorous argument.

That’s not a world in which I want to raise my children. That’s not a future that I’m willing to bequeath to them without a fight.

And like those examples that I started with, to whom I could never even dare to measure up to in courage, fortitude and wisdom, the least I can do is to face the ridicule and scorn of my contemporaries, to risk friendships, my reputation, my job, my business, or even my life, to make sure my children have a better future.

Thomas Paine said “If there be trouble, let it be in my day, that my children may have peace”.