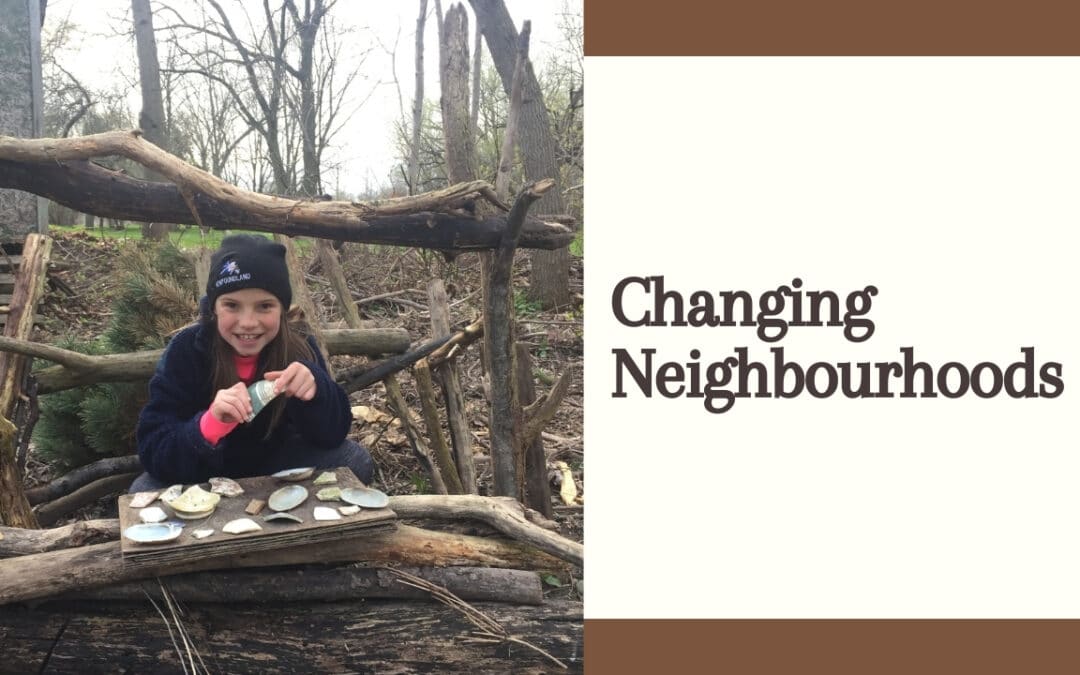 You may think that a quiet weekend at home skipping a freedom rally would mean you’re taking a break from standing for freedom — not at all!  There is never a break when you stand for freedom and principle — it’s a lifestyle.

This is over grass clippings.

We used to use our neighbourhood much more:

Played in the gully.

Played by the river.

It’s a great spot!  And sometimes we’ve taken down leaves and grass clippings and branches.  Some people even throw over their old chrysanthemums and then we’d use them in our forts 🙂

I suppose this is all very much unapproved according to the town and what is extra fun is that now that anyone doesn’t agree with your life choices they will turn you in and have the town notified of your actions – even though we’ve all done it over the last years we’ve lived here.

And so, we wrote a letter.  We hope this helps inspire you to stand up for yourself and not let small town government become more tyrannical than it already is.  Next election here will be grand.  It’s time this town was free from this sad spirit of oppression and fear that has ruled here for YEARS.  Smaller government is the answer.  Then watch this place thrive. 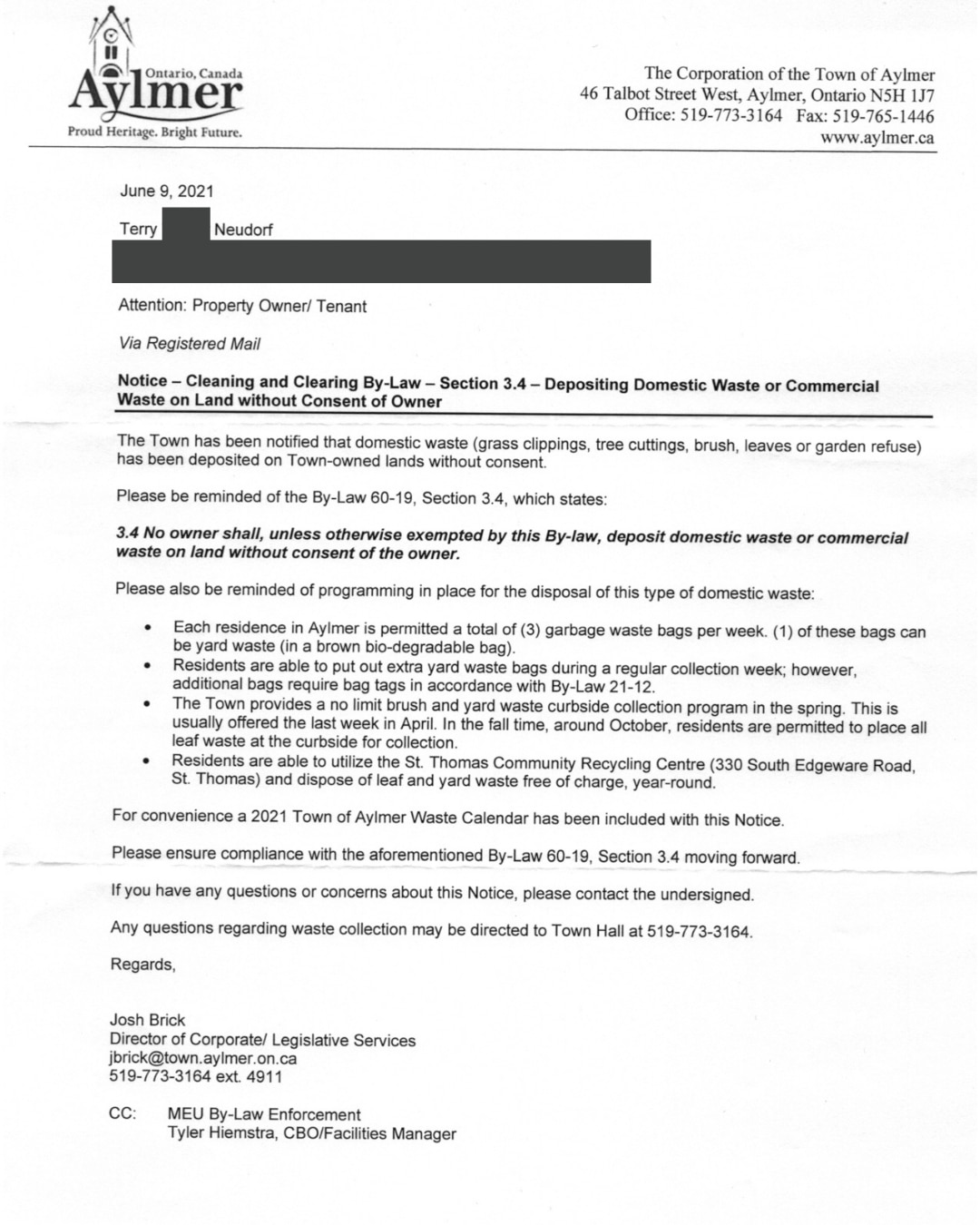 Dear Mr. Brick,
In the past 8 years that we have lived at this address in Aylmer, we have observed and openly chatted with no fewer than 8 neighbours who have deposited grass clippings and brush on “Town-owned lands without consent”.  Not one of them until recently would ever have had the audacity to snitch on another neighbour, not in least part because it is widely accepted and known that grass and brush, when deposited properly with respect to the environment, is ecologically beneficial to the nature of this land (“gully”).  Furthermore, this neighbourhood has never been the type to harbour petty snitchers, but alas, neighbourhoods change.
Let me also remind you that section 3.4, which you’ve quoted, mentions “on land without consent of the owner”.  As an astute civic employee, I should not need to remind you – someone who works for us – of who the owners of public land are – the public.  (It’s kind of right there in the word, after all.)
Common sense would naturally dictate that some management of public lands by civic administration is necessary.  However, that same common sense would see the nature of what you have written to me about here as laughably petty.  Perhaps it should come as no surprise, given the demonstrable lack of understanding by council and administration of this town of what the public is allowed to do on public space in Aylmer.  Should I be awaiting an emergency order from our Mayor with regard to said grass clippings?
Common sense, which has become increasingly uncommon in this town – a reflection of the current administration and its employees, has always prevailed upon good-hearted citizens, with the occasional wheelbarrow full of grass clippings being respectfully deposited in the lands you speak of, with nothing more than a kind wave by neighbours, followed by good-natured conversation about how much time our children enjoy in the gully.
If this common sense is now under threat, I respectfully advise you to take a good long look in the mirror at what lunacy would prompt this registered letter, and encourage some deep reflection on what such a petty letter portends for civil society.
I will not stoop to the cowardice of naming who the many neighbours are who do exactly as we do.  I will however say that the person who threatened to call the authorities at such a recent grassy deposit routinely puts all of their grass clippings and brush in the same spot, and has admitted as much.  We put our grass clippings on top of his.  I do hope this irony is not lost on you.
As such, we will continue on doing as we have, frustrated as well that the $9.50 cost of a registered letter, borne by taxpayers like us, had to be spent on this nonsensical situation.
Respectfully,
Terry Neudorf and the entire Neudorf Family
CC: Aylmer Town Council: Mary French, Sheri Andrews, Pete Barbour, Arthur Oslach, Mary Hamm, Jamie Chapman, Tom Charlton.
CC: Neudorf Family: Terry, Kimberly, Louisa, Oliver, & Sophie

I decided to look and see what other bylaws I’ve been breaking here all my life and well, I came up with quite a few.

I would suspect that these bylaws are ignored until some squeaky wheel like an irritated neighbour or bored police officer decide life isn’t worth living unless tyranny is the order of the day.  Misery loves company.

What bylaws have you broken?  I’m pretty sure your own town council and the mayor have broken them – just like Trudeau, just like health officials, just like all dictators that stop using common sense and try to appease the irrational and nonsensical.

This is why small government and volunteerism works and is fundamental to a thriving and vibrant community.  I’m looking forward to that happening here. 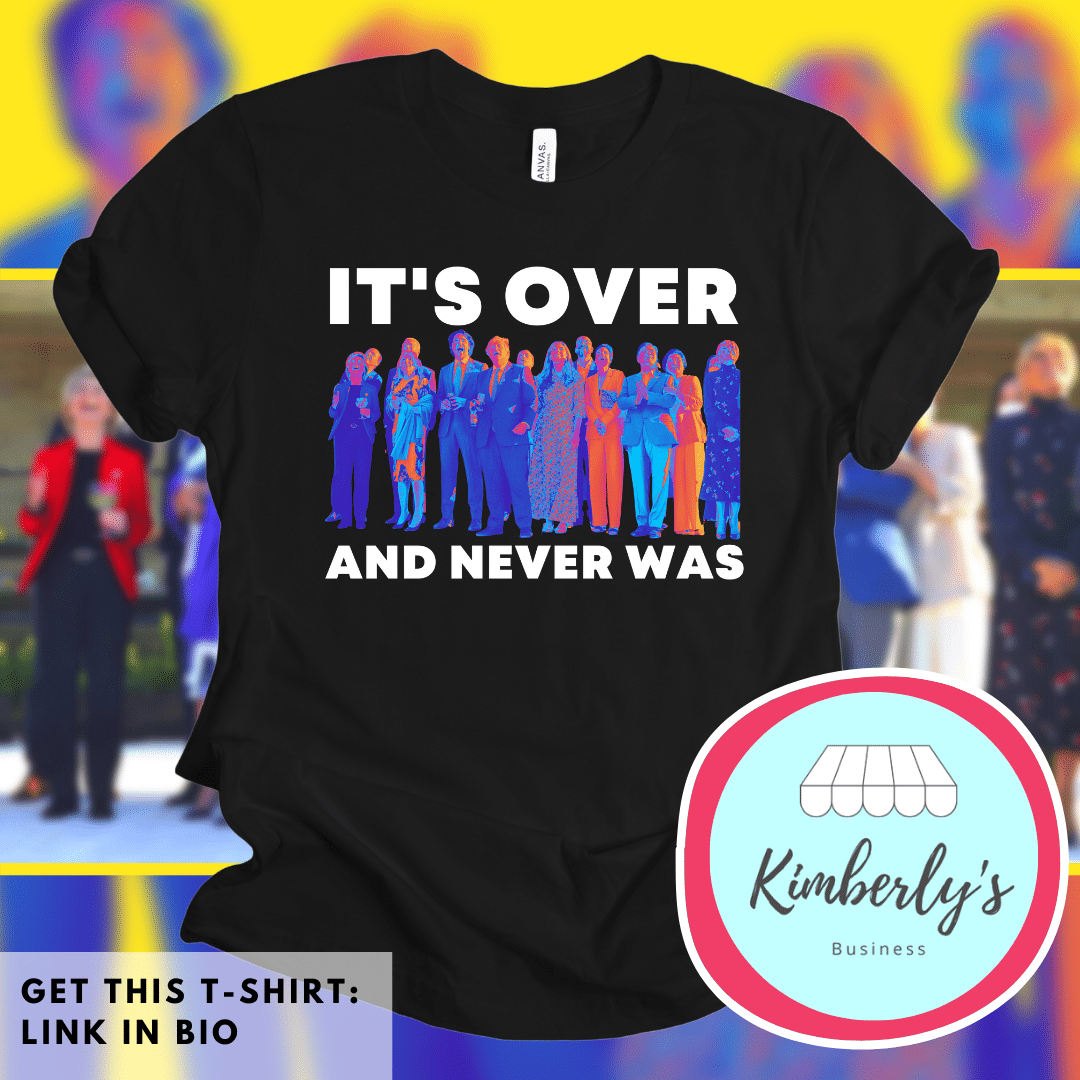 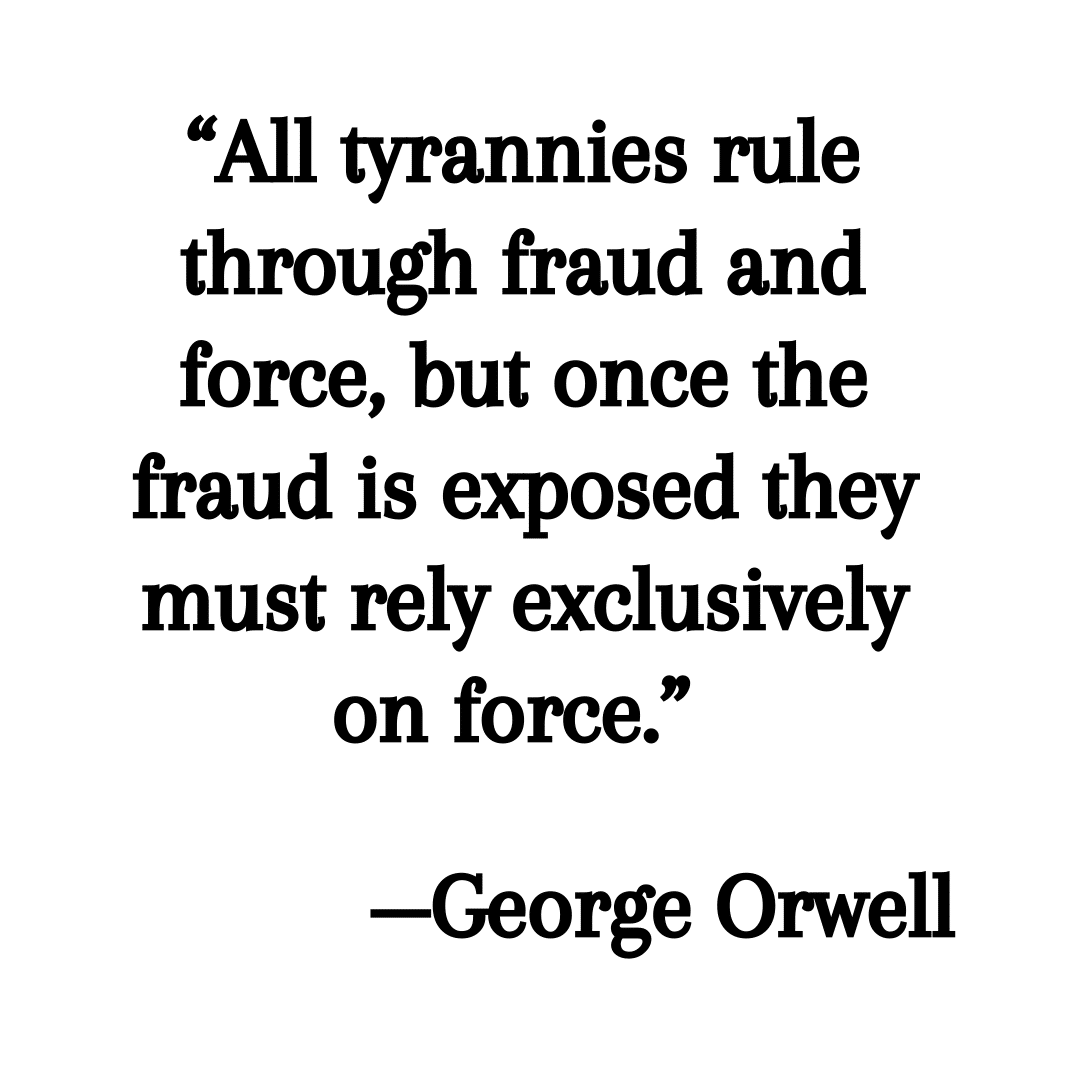 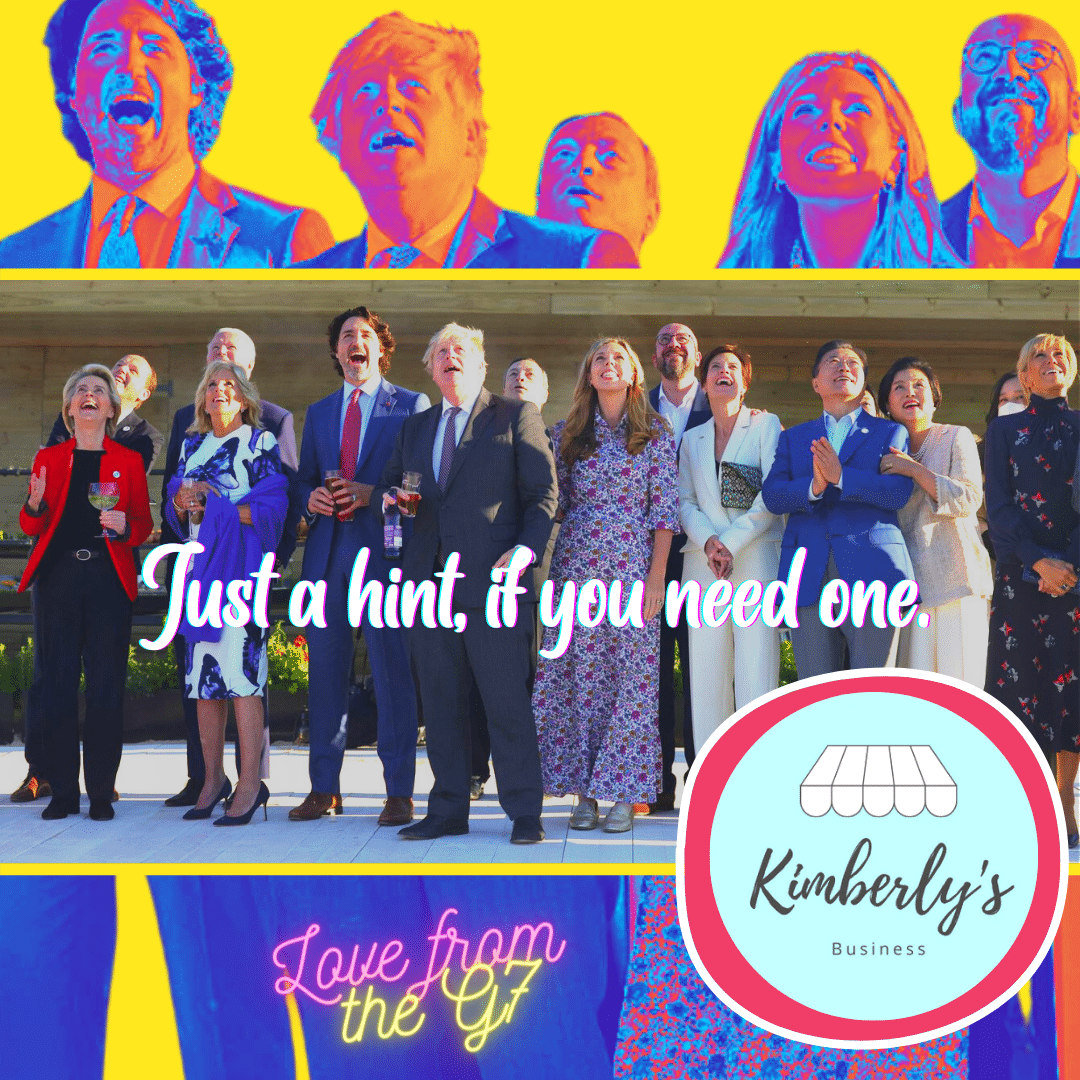