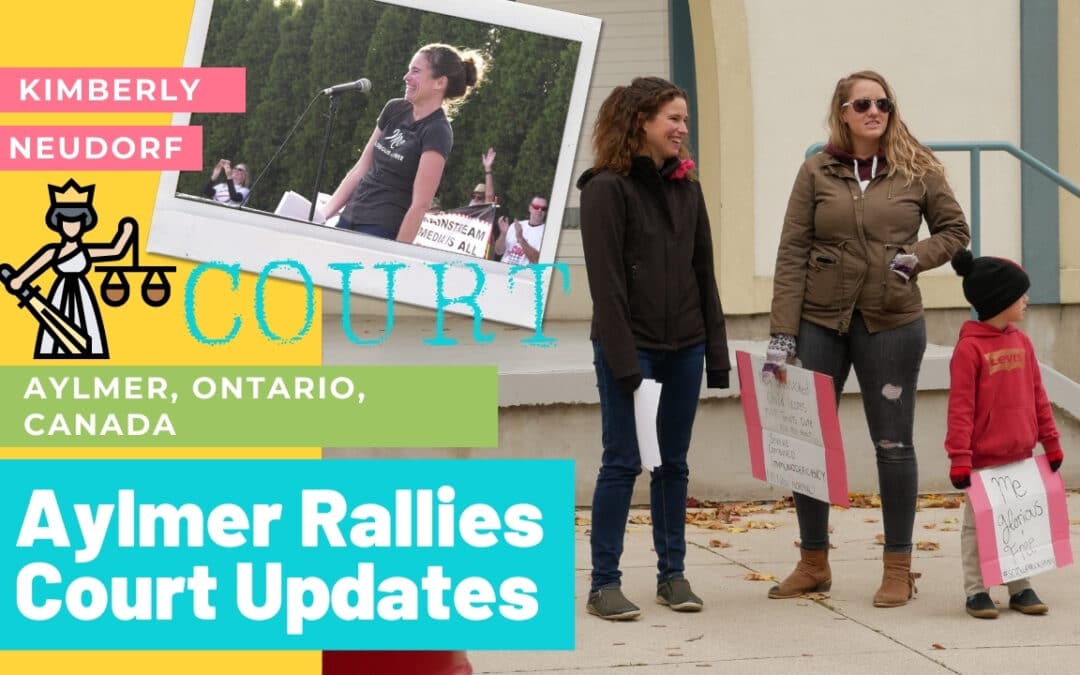 If you’d like to join be sure to name yourself as an observer.

April 25, 2022:  My representation pushed our meeting back to May 9, 2022, 10:30 AM because Rocco will no longer be representing me.  (See sidebar)  Once he has filed a motion before the court to be removed from the record I will be able to have discussions with Jack Huber myself and we will move forward to trial.  I believe the Crown would like me to plead guilty and pay a massive sum of money and if we go to trial will ask for double the massive sum.  At this point I don’t really know what is on the table since we will have to have discussions as now I will be representing myself.  I will be picking up my files including disclosure from Rocco’s office this week.

March 4, 2022: new Crown Prosecutor, Jack Huber.  JPT attempt #3.  Matter postponed until April 8, 2022.  Has the Superior Court of Justice decision that was released this week that they’ve been waiting for.

Dixon told us everyone was offered the same resolution of donation withdrawal. And [of course] we were not willing to proceed with that. I have no idea who ‘everyone’ is. We have nothing on record of that offer and I don’t remember that being offered. We will sort that out and check their records about this before our next meeting.

Dixon said that there is a Superior court decision regarding reopening act matter out of Toronto that many counsel has been waiting for from across the province to give them some direction. That decision hasn’t been released yet. The hope is that decision will give them guidance for all parties across the province in how to proceed with these matters.  Apparently, all other reopening matters have been adjourned to March 4 2022 to see if that decision has been released.
March 4 2022 is our next date with time to be announced and correspondence sent out.

Oct 7, 2021:  Required to phone or email Crown Attorney Ms. Dixon a day earlier for a chat.  My representative on behalf of Rocco Galati phoned and ended up receiving text message from Ms Dixon asking if we would just adjourn until December 10, 2021 TBD.  Not even a chat on the phone — only a text.  Ms. Dixon said they are waiting for a decision from a higher court from other cases ahead of mine and those decisions will (apparently) help guide us and them with how we pursue our case.

Every other reopening case in this area is being pushed to December 10, 2021 and afterwards.  It seems that dates being pushed back is not entirely out of the ordinary – but to what end?  How long until a reasonable amount of time for justice is no longer reasonable?  What sort of precedent is this already setting for 5 to 10 years down the line?

In the court on the 7th we relayed the request from Ms Dixon that we agreed to adjourn until December 10.  The judge wrote that down, said the time was to be determined and we adjourned for the day.  December 10, 2021 we’ll have take 2 of the Pre-Trial Date.

Rocco Galati has the disclosure.

They are putting these matters into September/October because other individuals with these types of charges are waiting for a higher court decision.

I am all sorted out!  I’m really happy to report that Rocco Galati has assigned me a junior lawyer for all of these pre trial steps.  There are a lot of them and it looks like they can be delayed quite a bit.  It makes much more sense for Rocco to save his expertise for an actual trial when that comes about and have his junior lawyer take care of all the steps leading up to that point.

On May 20th when Miss Dickson was asked if disclosure was sent she stated that:

“This is not something I can address immediately because the provincial offences disclosure goes out from a different office so I don’t have something digital that I can see.  I do know that I had essentially sent the information to the office with his contact information but I would have to wait until I got an email back from somebody – he’s probably quite busy at the moment as far as whether or not it has actually been sent.”

Miss Dickson will be following up and then we will revisit this matter June 24th.

This all certainly takes a long time.  These 4 charges were issued November 26 2020 with the first court date scheduled for January 14th and here we sit waiting to see if disclosure has been sent or received still — with a new date of June 24 2021.

Of course everyone is welcome to attend these pre-trial zoom court date meetings however, it appears that they are only to find out if disclosure information has been given or received and they are not actual trials and no rulings are made.  Once disclosure has been received then we set a pretrial date which can take a bit of time to schedule as well!

It is good to know what is going on!

I am proud to have Rocco Galati represent me and I hope that my case does him well in order to set precedent and get our lives back!

Since I’m not a criminal, or a lawyer, and utilized the public school education system in my preliminary years I haven’t learned the process of court proceedings.

Obviously there has been some big miscommunication that led to Rocco not being present today for my court date. He’s been found and I’m getting a handle on the process of court.

The last time Rocco and I were in court on March 12 for 3 minutes the court and Rocco exchanged contact information and established that the court would send the disclosure to him.  What happens next is what should have happened today, we confirm if Rocco received the disclosure and set a pretrial date.  Since I don’t know if he has received disclosure I was told to ask the court to put the motion forward to another month and we chose June 24.

Unfortunately we have to wait but I hope that on June 24 we establish that disclosure has been received and that Rocco sets a pretrial date.

In pretrial you either settle, they dismiss your case or they set trial dates for each ticket.  We plan to be setting trial dates and not settling.  Rocco will take this to the Supreme Court of Canada if needed.

Steps in Court (if anyone wants to suggest anything here please let me know!):

As Rocco was with me at my first court appearance I quickly realized that everyone would want to see him doing something in court – even if it’s just getting disclosure and setting a date.  If I wasn’t where I am sitting now I know I would want to see it!  I will continue to share the court links and times as they come up because even though these are small steps I think they are important.  Once these steps are complete then we will have a trial date and that will be an especially big deal.  I’m looking forward to it.

At some point a lawyer will take one of these hundreds of cases like mine to higher courts, set a precedent, and then this will be over.  I can’t wait for that to happen!  Please be sure to let me know if you are on your way – I’m cheering for you!

I am thrilled to be working with Rocco Galati and he is taking on my protest cases along with a few others as well, pro bono!

Why would he do that?

Well, these protest cases are important because they are the first step in setting Charter legal precedents.  I’m really glad to be here trying to make that happen.

It could also be because I have had the privilege of connecting with Vaccine Choice Canada.  When I was able to have Gisele Baribeau from Vaccine Choice Canada come and speak at my second freedom rally in Aylmer she was well aware of the unnecessary intimidation and overbearing actions of the town in the weeks preparing for the rally.  She got me onto their weekly zoom call in which Rocco heard my story and offered to write to the town and to the Aylmer police.  This support has been invaluable to me.

For now, we’re scheduling a zoom meeting to get coordinated so we don’t have any more miscommunication in the future.

Thanks for all of your support and I’ll keep you posted on what happens next!  Even those 3 minute court sessions. 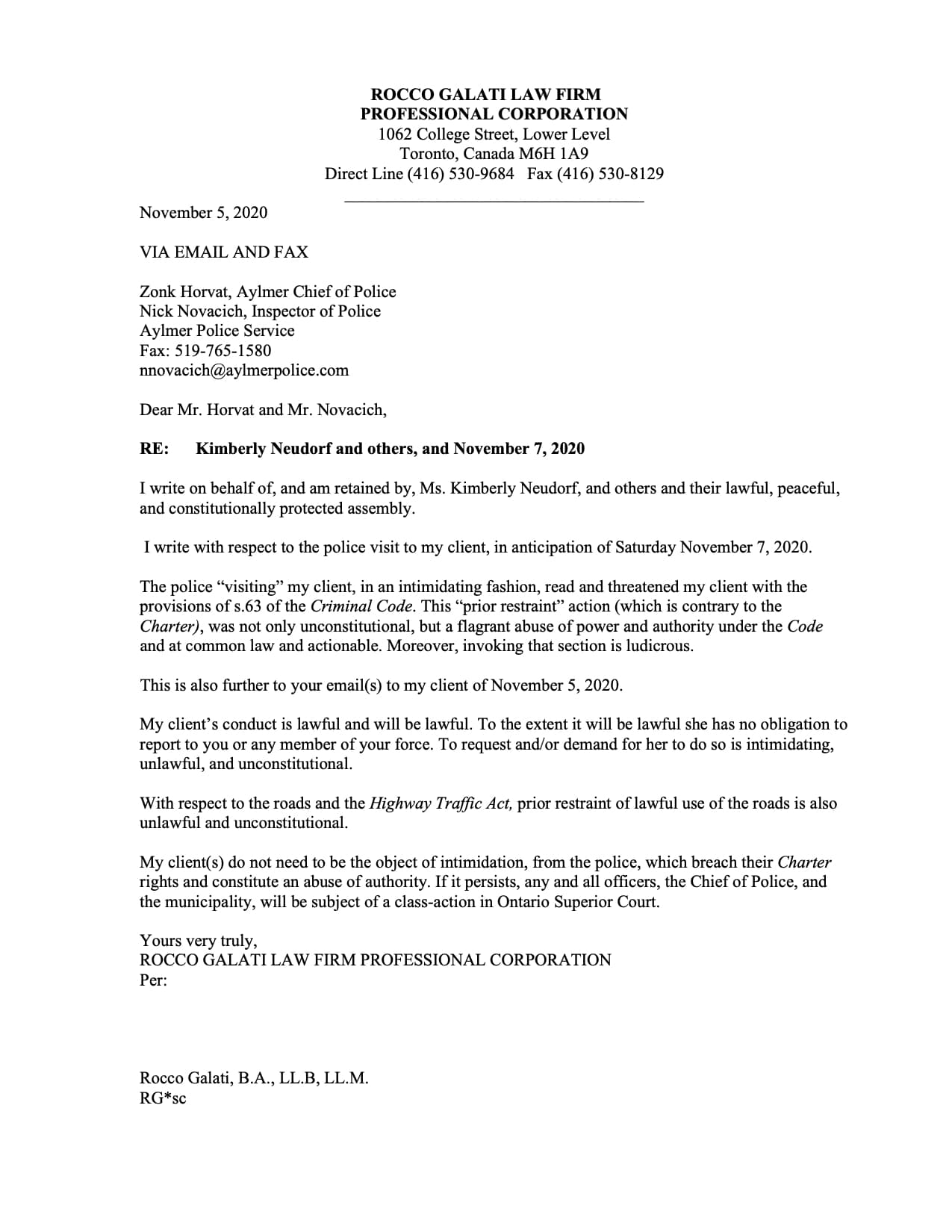 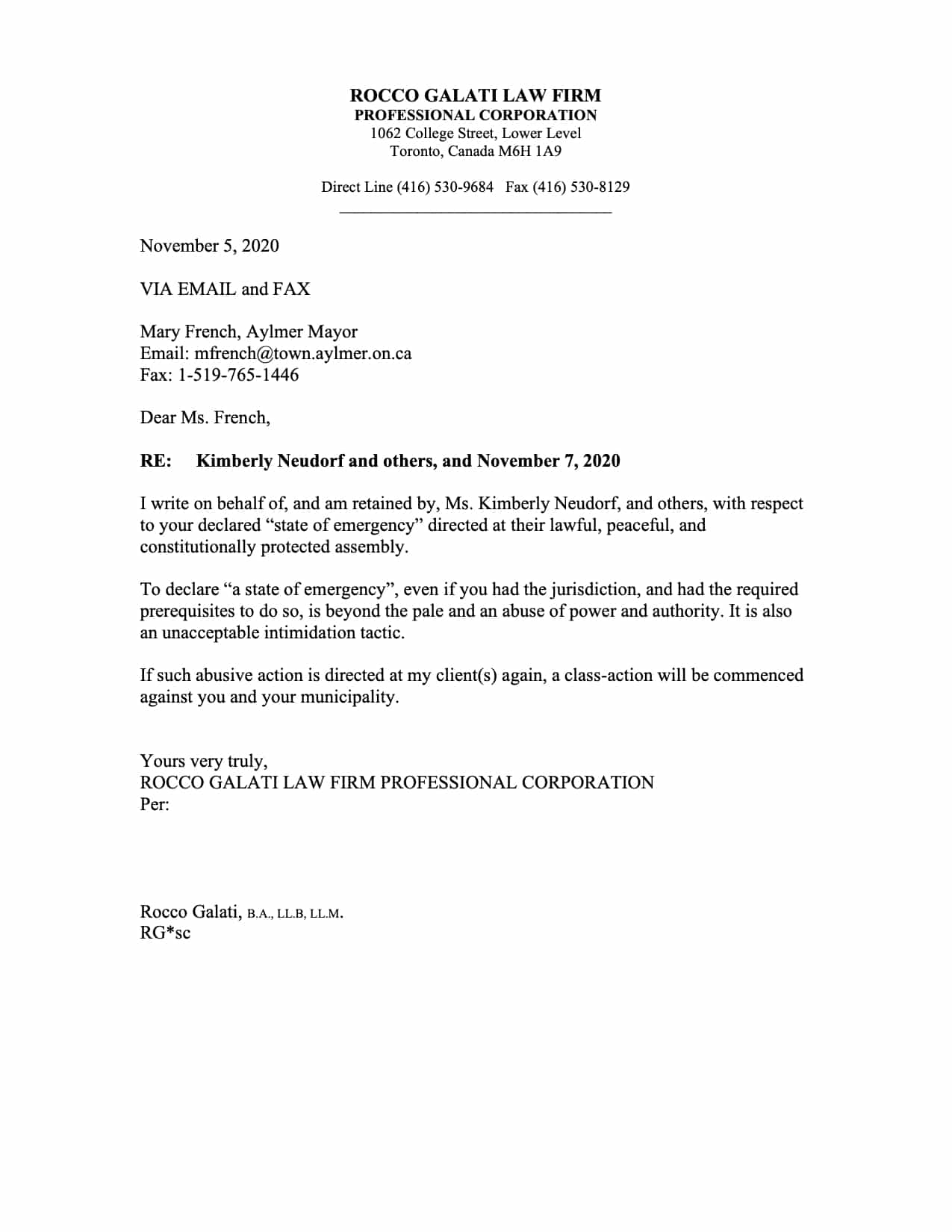 Thank you so much for your support and I’m truly sorry that this court meeting was completely uneventful. I thought something would have happened. When we find out what happened to Rocco Galati I will certainly let you know. Hopefully he is ok!
Since Rocco was away this morning and didn’t appear at court I could not confirm that he had the zoom codes or dates for today – although of course I’ve sent everything over – and I didn’t know if he had received disclosure yet nor could the crown confirm that disclosure was sent to Rocco or myself. So I had to ask the court to put the matter over for 4 weeks – or whenever they wanted to reschedule.  And so they picked June 24.
It also looks like we have no confirmation of disclosure so that is what the next court meeting will be about and there we set a pretrial date.
I have asked for disclosure by email and by phone and the last time Rocco and I were in court (for 3 minutes) on March 12 the court and Rocco exchanged contact information for them to send him the disclosure. For now I believe Miss Dickson from the court will be following up.
It looks like these 4 charges for Aylmer will not be dealt with for a long time as there are a lot of time wasters before you actually get to trial!
For now, it looks like it’s business as usual! So keep living freely and stand your ground. There is literally NOTHING to fear in doing that – look what’s happening to me! NOTHING!!! 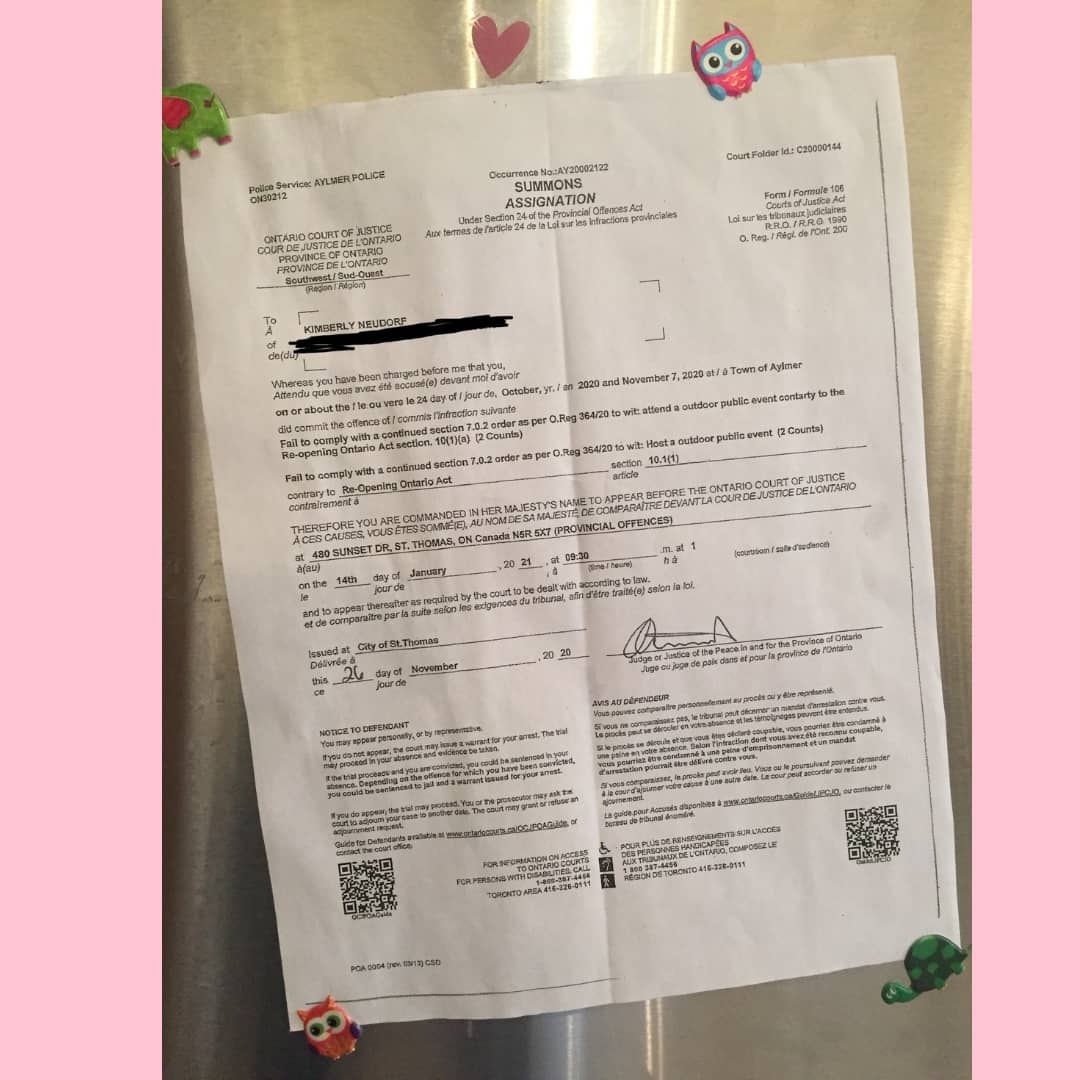